Oranmore Old Graveyard, the subject of this work, is situated on the right hand side of the main street as you go towards the southern end of the village.  It was originally accessed by a lane clearly shown on the old Ordnance Survey maps.  The lane has now been absorbed into a commercial development, through which it is still possible to gain access to the Graveyard. The key to the gate can be obtained from the shop on this site. 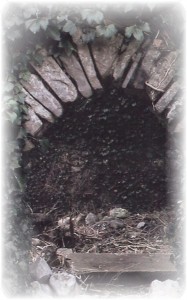 In 2000 there were plans to make the Graveyard into a pocket park so interested members of the Oranmore community decided to take steps to preserve the Graveyard. At that time the Graveyard had been closed to new graves for nearly 50 years.  It had been neglected and was overgrown and the perimeter walls were breached.  The Committee felt strongly that steps needed to be taken to restore and preserve the Graveyard as it is a designated archaeological site and is the last resting place of generations of people from Oranmore and the surrounding areas. The Committee restored the walls, and with assistance from Galway County Council made a path around the Graveyard to make the graves accessible.   Various other works were carried throughout the site.

At all times during restoration works, steps were taken to ensure that the integrity of the graves was not compromised. Having accomplished access to most of the graves, the Committee decided to carry out a survey and record the inscriptions on the various slabs and monuments as far as possible.  In tandem with this, we proceeded to initiate the recording of all the deaths registered in the Ecclesiastical parish of Oranmore between 1864 and 1950 to assist those who may wish to investigate their ancestry.  Access to the Register of Deaths was very limited and ultimately completely restricted and therefore the Registry of Deaths information, while as complete as possible, should in specific cases be investigated by individuals at the Registry of Deaths. The result of the work is contained in our publication ‘ Memories in Stone – A Survey of the Old Graveyard Oranmore‘ which you can view here We hope that it will be of benefit to those who are interested in tracing their Oranmore roots.